Every once in a while Nature and the local children co-inspire to hand you an illustration for a concept that would otherwise be hard to illustrate. 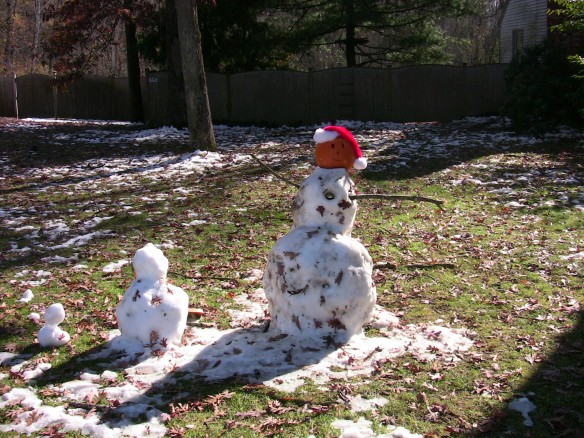 Cognitive dissonance is a discomfort caused by holding conflicting ideas simultaneously. The theory of cognitive dissonance proposes that people have a motivational drive to reduce dissonance. They do this by changing their attitudes, beliefs, and actions.[2] Dissonance is also reduced by justifying, blaming, and denying. The phrase was coined by Leon Festinger in his 1956 book When Prophecy Fails, which chronicled the followers of a UFO cult as reality clashed with their fervent beliefs.[3][4] It is one of the most influential and extensively studied theories in social psychology. A closely related term, cognitive disequilibrium, was coined by Jean Piaget to refer to the experience of a discrepancy between something new and something already known or believed.

As the snow was coming down hard Saturday and the niece and nephews were bundling up for snow-play I joked to them, “Time to make the Halloween snowmen!” pause, pause, pause… laugh!

This was the result, Halloween snowman with jack-o-lantern head and Santa Clause hat ready to greet trick-or-treaters Monday.

The record statement from the National Weather Service reads: