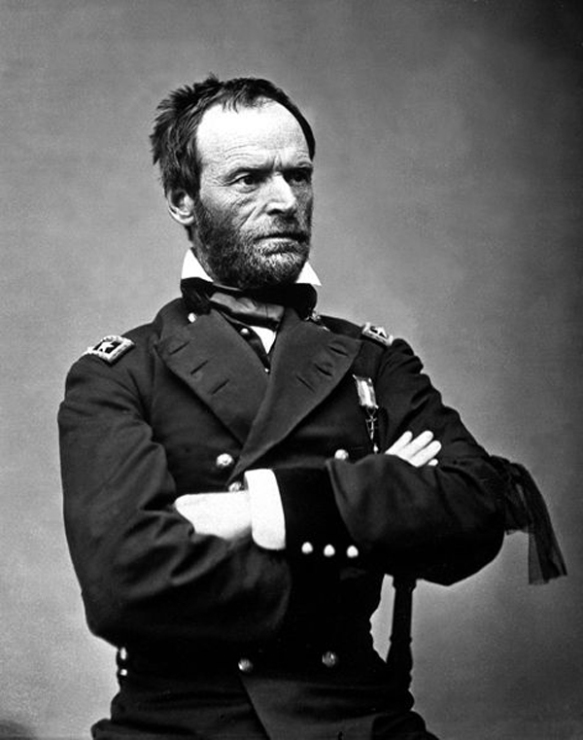 William Tecumseh Sherman, 1865 by Mathew Bradey - The face of Experience.

I’m not sure what inspired the Chiefio on this particular foray into the history of the Gadsden Purchase, How Slavery Shrunk America, and how it played into the politics of antebellum US westward expansion, but where he leads I will follow… and register a comment.

The basic outline of the history of the Gadsden Purchase that he lays out jibes pretty well with what I learned as far back as high school, but the larger context is something I’ve missed till now, very interesting.  I think he did a good job pulling the various strands together, but I also think the point of how strongly the Antebellum South was driven to expand its slave holding was not put strongly enough.

I’ve been back and forth on the issue a couple of times in my adult life, and even as a Yankee who is a little apprehensive of the ‘Northern’ propensity of centralization of Federal authority, a little reluctant to call out the South on the issue; yet, I think it is time to re-remember the infectious rot that was at the core of Southern society and economy – slavery – and a slave economy that propelled a class of some 300,000 Southerners who, [according to Spengler] “knew nothing but hunting, drinking, gambling and dueling, a class who  benefited from slavery and would rather die than work for a living,” to make bloody war in its defense.  It was the Union Army’s task to kill them [and they largely succeeded].  As Gen. William T. Sherman put it, “I would make this war as severe as possible, and show no symptoms of tiring till the South begs for mercy.”

I served with a great many Southerners when I was in the military, good guys all, brave, dedicated professionals, yet I doubt one of them would wish to stare down the spectre Slavery that waits for them in their history [our history].

Professor Robert E May demonstrated this in his book, The Southern Dream of a Caribbean Empire, 1854-1861.  Here is an excerpt:

“The Memphis Daily Appeal, December 30, 1860, wrote that a slave ’empire’ would arise ‘from San Diego, on the Pacific Ocean, thence southward, along the shore line of Mexico and Central America, at low tide, to the Isthmus of Panama; thence South – still South! – along the western shore line of New Granada and Ecuador, to where the southern boundary of the latter strikes the ocean; thence east over the Andes to the head springs of the Amazon; thence down the mightiest of inland seas, through the teeming bosom of the broadest and richest delta in the world, to the Atlantic Ocean’.”

May quotes Ortis Ferry, congressman from Connecticut summing up the issue:

“Let but the ties which bind the states to the federal government be broken and the leaders of the rebellion see glittering before them the prizes of a slave-holding empire which, grasping Cuba with one hand, and Mexico with the other, shall distribute titles, fame and fortune to the foremost in the strife. Such, in my opinion, is the real origin of the present revolt, and such are the motives which inspire its leaders.”

This motivation for expansion of the slave-holding territories if fulfilled would also have continued to affect the socio-economic development of the South as it eventually did historically, that is producing a relatively small, socially regressive, agrarian society based on chattel slavery, little industrial development, and a large, dangerous [to the slave owner] slave population.  The South’s culture modeled itself on an idle and landed aristocracy, and those [white men] who were not presently members of that class, certainly aspired to it and not to industry.  Ultimately I think things would have turned out much the same for the South.

The fact of the matter is that the South after Gettysburg and Vicksburg did have much of a chance at victory either industrially or demographically, and that while the Northern states suffered proportionally the highest casualties of any war it has ever fought, 2%  of the general population [compared to .35% for WW2], better than 25% of white southern men or military age died to support the lie that Southerners were simply patriots fighting for love of their homeland.

“I think that the North fought that war with one hand behind its back…If there had been more Southern victories, and a lot more, the North simply would have brought that other hand out from behind its back. I don’t think the South ever had a chance to win that War.”

It is truly sad that such causes inevitably bring a Downfall.  The other night I watched, A Woman in Berlin, a very stern account by an anonymous German woman of what befalls a nation when some other nation has to stir themselves to put such a deviant ideology in its place.

Let us hope we see no more of that, and have learn’t our lessons.