Welcome to part four of this series or articles, which is a deep, though hopefully not exhausting, exploration of Austrian director/writer Jessica Hausner’s excellent 2009 film Lourdes.  Part One of the series:  Prologue to a Posy, lays out in some detail the genesis of the project and outlines its basic method, which is an attempt at a one-man version of film critic Roger Ebert,’s Cinema Interruptus.  Part Two of this series:  Day One: The Wheelchair is No Barrier to Desire, takes us through approximately the first twenty five minutes of the film, to the end of the first full day in in-movie time.  Part Three of this series:  Day Two, The Nigredo – Eating an Elephant, or Too Big a Rat, takes us though to the end of the difficult second day or their pilgrimage for our characters, and several important developments in: plot, character, and theme.

If you haven’t done so I suggest that you back track and start this series from the beginning – or – just plunge ahead and pick up our story mid stream.

END_OF_DOCUMENT_TOKEN_TO_BE_REPLACED 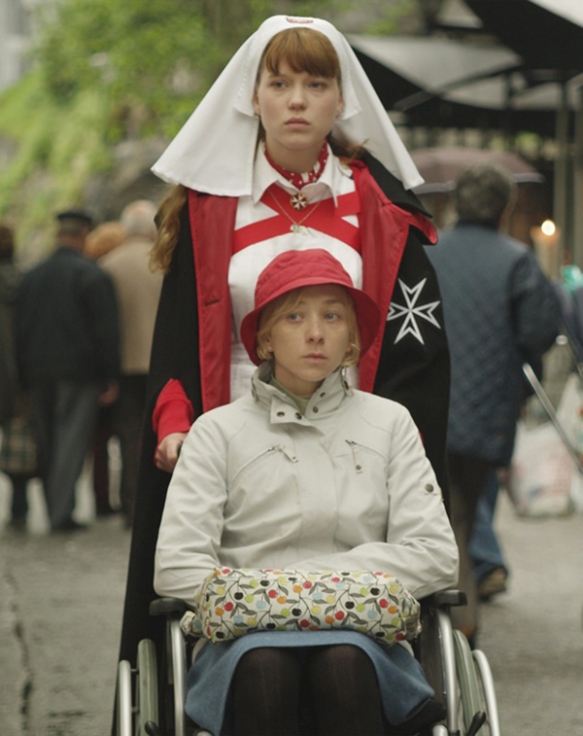 Welcome to Part Three of this series, which is a certain kind of critical analysis of Austrian director/writer Jessica Hausner’s 2009 film Lourdes.  Part one of the series Prologue to a Posy, lays out in some detail the genesis of the project and outlines its basic method, which is a kind of one-man version of film critic Roger Ebert,’s Cinema Interruptus.  Part Two of this series Day One: The Wheelchair is No Barrier to Desire, takes us through approximately the first twenty five minutes of the film, to the end of the first full day in in-movie time.  If you haven’t done so I suggest that you back track and start this series from the beginning.

What you will be seeing, reading, will be something that looks a bit like the full screenplay of the movie, transcribed from the screen by me, with commentary, informal micro-essays, and observations interspersed between the dialogue and description.  The biggest problem I foresee with this format is a breakdown in the narrative flow of the movie, or a basic incoherence, which seems hard to get around, especially when working within the constraints of this blogging platform.  I’ll do my best to make improvements if readers are having difficulty in the comprehension department.  For typos and other grammar specific errors we at the Meme Merchants Consortium prefer you to use the Comment Form on our Contact Page, this prevents the Comments section from getting cluttered up.

This is really audacious, wow! I will need to look at this and get back with a better response. But I certainly do like what you are doing here, ww. This as my favorite film of 2010:

I appreciate the compliment.  Audacious is of course a word that can cut in two directions.  This project, because of the unique and demanding nature of the process, has a high potential for failure, for many reasons, mental exhaustion being one of them.

This project is becoming a sort of elephant.  An old boss of mine once said of large projects, “There’s only one way to eat an elephant, one bite at a time.”  True maybe, but at the same time, if you know snakes, or have ever kept one as a pet you will also know that for a snake the act of eating is a race between digestion and putrefaction.  If you are a snake and eat too large of a rat you die from sepsis [coincidentally, or ironically, according to Chinese astrology I am a snake].  We’ll have to see how much of the pressure to complete the project in its entirety I can stand – or if anyone really cares enough to read it all.

END_OF_DOCUMENT_TOKEN_TO_BE_REPLACED 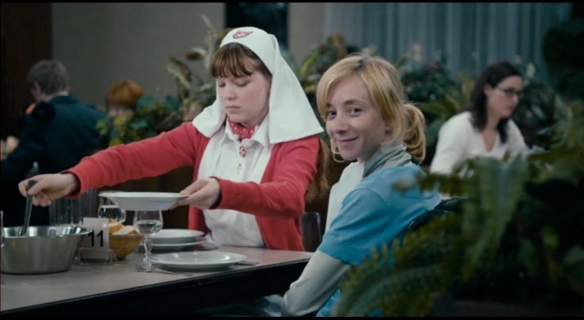 In the prologue to this series: Lourdes – Prologue to a Posy, I laid out the premise that I was going to be conducting a detailed, though maybe not microscopic, analysis of Austrian director/writer Jessica Hausner’s 2009 film Lourdes as a kind of didactic exercise to see if what a relative nobody like me, if he applied himself to the subject, could come up with.  The particular didactic method I have chosen to use is a kind of one-man version of the Cinema Interruptus format developed by film critic Roger Ebert, which I elaborated upon in the previous article.

So, what you are going to be seeing is something resembling a screenplay of the movie, which I am currently transcribing in stages from the screen word by word, scene by scene, with my comments and observations interlaced between.  I really don’t know how well this is going to work, I’ve never tried anything like it.  As I said in the Prologue, this may very well turn into a mad, mad quest.  Nothing, hazarded nothing gained.  At the very least its good practice for me.  Let’s hope you are able to gain something from it as well.

The WordPress blogging platform and this particular theme, impose some very strict limits on what it is possible to do in terms of formatting a structure this complex, but I’ve devised something out that seems to work reasonably well.  My aim is is first readability and comprehensibility, only then ‘correctness’ in terms of format.  So, if neither aim is satisfied to your satisfaction, my apologies in advance.

Now we begin the task in earnest.

END_OF_DOCUMENT_TOKEN_TO_BE_REPLACED 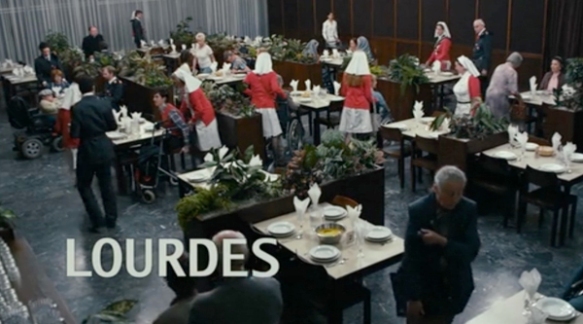 Every once in a while I come across a movie review where I wonder if the reviewer and I have actually watched the same movie.  I know that there are often substantially different ‘cuts’ of a movie presented to different audiences floating around out there.  One of the classic examples of this is the 142 minute nominally nihilistic Euro-centric theatrical cut of director Terry Gilliam’s classic 1985 film Brazil, and the ofttimes disparaged 95 minute American, ‘love conquerors all’,cut of the film.  Even so, sometimes it seems there exists out there a tin-pot doppelganger to a movie I really enjoyed, which I find perplexing – or maybe it’s just that I’m odd in some way.

I actually don’t actually watch a whole lot of movies; however, since the coming of Netflix to Middle Earth I have been watching many more than I used to, but I think I could hardly match the performance of most serious film buffs.  In exception to the general trend, in the last week or two I have seen several very worth while ones that have been turning into fodder for the Meme Merchants Consortium think tank.

This week it has been Austrian director/writer Jessica Hausner’s 2009 film Lourdes that has got the groups attention at the Meme Merchant’s Film Society.  On the whole we  really liked the film, we each tend to find some fault with certain aspects, but the discussion has been whether we should give it four or five Netflix stars.

END_OF_DOCUMENT_TOKEN_TO_BE_REPLACED

As I continue to stall for time while I am bogged down with other writings I wanted to share something with you that came across my desktop the other day that might not wind up on your desktop that I think is significant.  This is not a subject that I feel any legitimacy or competency in addressing myself, but never the less I think it is a very important issue, namely prostitution and the sex-trade.  Fortunately my internet antennae are tuned to some excellent sources who can address the issue from rather unique points of view.

This subject of this post came to me originally through Stella at My Body The City:The Secret Life of a Manhattan Callgirl, which linked to this article:

The issue of child prostitution and its supposed alter-ego, adult prostitution, are personal to me because I’ve experienced both, having been prostituted between the ages of fifteen and twenty-two.

This is the dichotomy of adult and child and they are viewed as very separate, very distinct, so that there is a clearly perceived line between these stages, these ages, but in fact it is not a line.  It is a bridge.  It is a bridge that spans the in-between; that gap that connects the points in the lives of so many women who were prostituted first as children then as adults.  I lived that bridge in my own prostitution life, when I was turning from a child into a woman, and I was used sexually for money on most of the days that made up my adolescence, as I was before in childhood and afterwards in early adulthood.  And here is the crux of the matter: it was all the same nightmare to me.

Please continue to the rest of the article at TheProstitutionExperience.

I was following the thread on controversy over the recent Lewandowsky et al paper, over at Lucia Liljegren’s blog TheBlackboard entitled: Multiple IPs, Hide My Ass and the Lewandowsky survey, when I noticed commentor Bob Koss posted links to a Twitter exchange between Lucia and Peter Gleick – yes – that Peter Gleick.  You can follow the links yourself.

Irony? Coincidence? When I downloaded the NYTimes Eastwood convention story, the ad on the page was about dementia.

Since we don’t do Twitter around here I’ll just have to post my reply to the Gleickster here:

Coincidence?  Of course not.  As we all know its a kind of metaphysical law of the universe that confirmation of whatever your deepest most paranoid fears and biases are will automatically appear before your eyes.

An ideology is a self-referential system of answers based on self-limited set of questions.